On the horizon there is a real possibility that digital radio broadcasting in the UK could become affordable…. 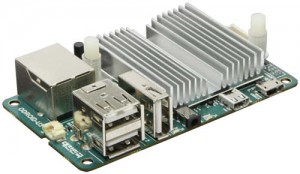 he picture on the right is of a small yet powerful Linux computer called the ODroid.  It was described yesterday by Martin James (Manager of Broadcast Radio) at Ofcom as “like a Raspberry Pi on steroids”.

It is smaller than a pack of playing cards, yet it is this hardware that they were using to demonstrate the potential of Low Cost DAB at Riverside House yesterday.   It seems incredible, but this diminutive device was being used to encode 6 audio streams into MP2 (the current codec of choice for DAB in the UK) and then multiplex them together into a DAB multiplex suitable to be fed to a Band III transmitter modulator.   Thus for around $65 plus some free open-source software it seems possible to produce a mux signal equivalent in many ways to that generated by professional DAB Mux equipment costing tens of thousands of pounds.

And it seemed pretty stable too.  Rashid Mustapha (low cost DAB guru at Ofcom) demonstrated the lack of impact by failing on of the programme streams (by pulling the plug!).  The other five streams on the Mux happily carried on – as demonstrated on a domestic DAB radio set alongside the demo equipment.

Of course more is needed to transmit DAB – not least a modulator (to turn the Mux bistream into a radio signal), an amplifier (to amplify!) a filter (to remove any sprogs generated in the amplification stage) and an antenna plus some kind of tall structure to mount it on.  All this does not come cheap, but then again, compared to the cost of carriage on existing commercial Mux’s, it is not expensive either.

Nor should we forget the cost of links – the important lines that get programme services from different stations to the little ODroid Mux box, and potentially a broad link from the output of the little Mux box up to the transmitter site.  Yet here too there are low cost alternatives to current approaches.  Trials indicate that the internet is stable enough for individual programme feeds.  And for the big link between Mux and transmitter there are affordable digital microwave links available.   Intruigingly also Ofcom hinted at the possibility of using on-channel repeaters.  This means the mux could be connected to a low power transmitter at a suitable host location (possibly one of the radio stations hosted on the Mux), and then this signal could be received, amplified and re-transmitted from a big hill giving wide area coverage.

There is still a long way to go.  The current stage is very much prototype.   The next stage is a trial next year for which Ofcom recently issued a consultation (see post below).

It will be interesting to see how this low-cost DAB concept develops, and how incumbent DAB Mux operators  will react.  Hopefully there is room in the UK Broadcast industry for both “Gold Plated” and “Low Cost” DAB.